My Attempt At Cloth Diapering

When I  found out that I was pregnant with my first son I was really excited. I spent most of my time on the computer reading about pregnancy and raising a baby. I found this baby cost calculator online that estimates how much you will pay during the first year of your childs life. When I went through and added everything up my costs came to almost 6000 bucks! Does it REALLY cost that much to take care of a baby for just one year?! I went through the cost calculator and started cutting things out.  I didn't really need a changing table, baby rocker, dresser or diaper bag (all of my purses are big enough to hold my kitchen sink, so they could handle a few diapers and a bottle). Then I realized that it wasn't just these big items that were making the costs go up it was the diapers, baby food, clothes and toys that we would be buying him. According to this calculator disposable diapers were going to cost me $72.00 a month, thats $864.00 a year! I could buy the all of those things that I cut out of the budget with that much money. They have an option for cloth diapers on the cost calculator as well, which was $19.00 per month if you washed them on your own. This price seemed a lot more reasonable to me but did I really want to try cloth?
My first thought was... AHHHH diaper pins! It honestly freaks me out to have anything so sharp next to a baby's skin and trying to put a diaper onto a wiggley baby, one of you is bound to get stabed.
Then I rememberd the pail of stinky diapers out in the garage next to our washer when I was a kid. Could I really wash those poopy diapers? My Mom cloth diapered my 4 siblings and I so it shouldn't really be that hard to do.
A few months ago I dicided to make a few cloth diapers to see if I would like it. If it didn't work out, then it wasn't a big loss.
I found a free pattern online for a pocket diaper and made a few. I used some prefold diapers that I bought on sale a few months back as inserts. Some were made with velcro closures and a few with metal snaps. The diapers looked really cute but they were not very efective. The ones with velcro never stayed on my son very long. There were quite a few times where I found my baby running around the house butt naked. Once I switched a few of the diapers to metal snaps that wasnt much of a problem but some of the metal snaps rusting once they went through the washer a few times.  I also had some leaking problems around the leg area of the diaper so I was changing Charlie's diaper every hour which was a little too much for me. I ended up moving back to disposables.
Since the last design didn't work for Charlie, I spent a few days trying to alter the old pattern to work for him. I took apart one of the old diapers and reused the material so if the new pattern didn't work I wouldn't waist money. I looked at a bunch of different diapering options online and watched a lot of diaper reviews. It was really helpful to get a look at real moms and hear what they liked and didn't like about cloth diapers. It made it a lot easier for me to decide how I was going to try to design my diapers. Thank you to all those moms and dads who took the time to do diaper reveiws and show us your diaper routines.
Here is what I came up with. 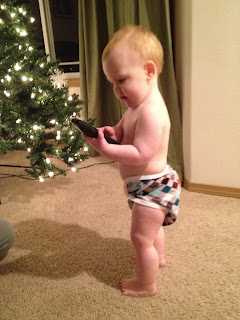 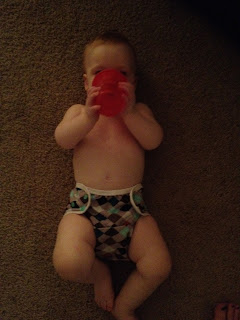 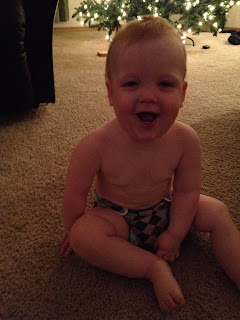 For my new diaper I got rid of the pocket and added double gussets to help keep it from leaking, plus I used fold over elastic  and I changed the shape a little around the butt area. Once I finished the diaper I put it on Charlie to do the leak test. I finished the diaper later on in the day (around 5:00) and he wore it until his bed time (8:30) with no leaks! I will do another leak later to see how long the diaper can really last.
It still has a few things that I need to fix and alter, but it seems to work pretty well (at least it's better than the first ones I made). For the next diaper I think I am going to try making my own pattern from scratch so that I can get a better fit for Charlie. Lets just hope I can get it to work.


Thanks for reading!
Posted at 11:39 AM No comments:
Email ThisBlogThis!Share to TwitterShare to FacebookShare to Pinterest
Labels: Cloth Diapers, Handmade, Sewing 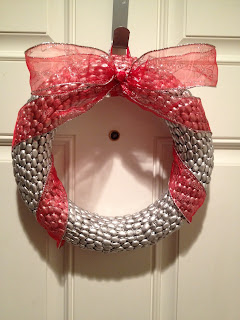 Here is another wreath tutorial. The women at my church made these at an activity last year and I was not able to attend, so I though this would be a good chance to give it a try.
I had to do most of this project while Charlie was asleep because he really wanted the hot glue gun. He has grown tall enough that he can reach things on the table now. He almost pulled the whole container of beans off the table, so I had to put everything away until he took a nap. I was lucky that he took one of his rare 3 1/2 hour naps, I was able to get a lot done.

The materials you will need are...
- 1 foam wreath
- pinto beans (any type of bean will work)
- hot glue gun
- glue sticks
- spray paint
- ribbon
- lots of time and patience

Put 2 or 3 layers of paint on it and let it dry over night. Just remember when painting anything make sure that you do it in a well ventilated area. After you are sure that your paint is dry you can attach your ribbon and hang it on the door.
Posted at 8:19 PM No comments:
Email ThisBlogThis!Share to TwitterShare to FacebookShare to Pinterest
Labels: Christmas, Handmade, Tutorial, Wreath
Newer Posts Older Posts Home
Subscribe to: Posts (Atom)